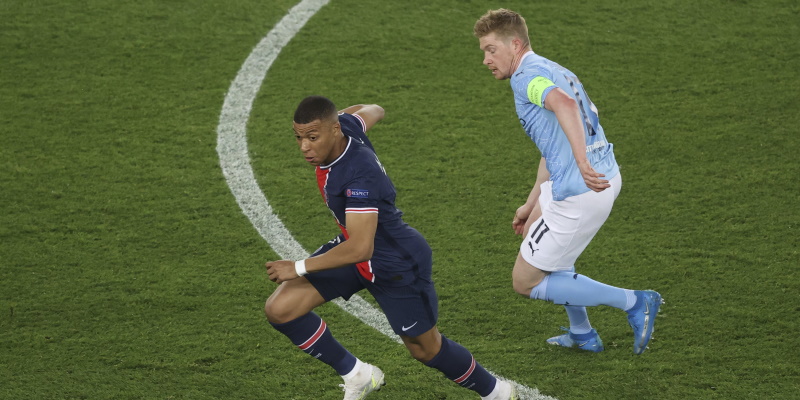 Manchester City will be aiming to reach their first ever Champions League final in midweek as they welcome Paris Saint-Germain to the Etihad Stadium. Pep Guardiola’s side are 2-1 up on aggregate after their first leg win in Paris, a result that has made them favourites in the football betting online.

City edged out the first leg with a 2-1 victory and they are unbeaten in all four meetings with the French giants. Marquinhos gave PSG an early lead but two second half goals put the Premier League leaders in a commanding position. Kevin De Bruyne got the equaliser shortly after the hour mark, before Riyad Mahrez gave City a crucial second away goal.

Guardiola has a fully fit squad to pick from for this game and he could name an unchanged starting line up from the first leg.

PSG boss Mauricio Pochettino will be without midfield star Idrissa Gueye after he was sent off in the first leg with Ander Herrera set to replace the Senegalese international in the team.

City are pushing for a historic first ever club treble this season after Guardiola’s side secured their first trophy of the EFL Cup earlier this month. They look nailed on to seal the Premier League title in May and the Champions League remains the only major trophy the Spanish coach has not won during his time in England.

Pochettino is under similar pressure in Paris with the defending Ligue 1 champions looking to secure a first ever Champions League title after losing to Bayern Munich in the 2020 final. The former Spurs boss will have his hand forced slightly by the first leg result as he aims to balance their own demanding end to the season.

With all of the pressure on the visitors, City have some breathing space on home soil and they will be happy to end 90 minutes with a draw, priced at 4.15. They are 1.74 to seal a final place with a win, while PSG are 4.35 for the victory – but a win alone might not be enough given City’s two away goals. Indeed, to qualify, PSG’s odds move to 6.00, while City are in to 1.12.

Kevin De Bruyne has been a vital figure for City in the knockout stages this season with a goal at every stage for them so far in 2021. He netted in the first leg and could do so again here.

A draw is enough for City to clinch a final spot and despite the all-star attack available to Pochettino the wind seems to be blowing for Guardiola after their first leg win.

With so much attacking talent on display this game is an almost certainty to have goals in it and City have only failed to score once in their last 12 games in all competitions with PSG on target in their last 13 from 15.