Being good at sports and having great physicality go hand in hand. Because athletes have to train their bodies in order to excel, it’s no wonder that the best athletes in the world also top the charts of most attractive. From gymnastics to ultimate fighting, we’ve compiled a list of the top 20 most sexy female athletes in the world that not only excel in their field, but look good doing it. Spin Sports online sports mobile betting is the place to bet on the best and upcoming female athletes of today. First on the top of our list of hottest female athletes is Tennis superstar Serena Williams. Born in Saginaw, Michigan in 1981, Serena came to revolutionize women’s Tennis with a powerful play style that is unmatched in the game. To date Williams has won a total of 23 Grand Slam titles, more than any other player, man or woman, in the open era. She is also well known off the court as a powerful champion of philanthropy and women’s rights. Her Instagram handle is @serenawilliams.

Alexandra Raeva is a 27-year-old Russian Curler and current member of the Russian national women’s Curling team. Raeva has a slew of high profile Curling medals under her belt, including a silver medal at the 2017 Beijing World Championships and a Gold at the 2015 Esbjerg European Championships. Her Instagram handle is @aleraeva.

Caroline Wozniacki is a former professional Tennis player from Denmark. Though she is just 29, Wozniacki retired from professional Tennis in 2019. This doesn’t minimize her impact on the sport however, having reached the world number one position in singles Tennis during her career, making her the first woman from a Scandinavia country to do so. Wozniacki can be followed on Instagram at @carowozniacki. 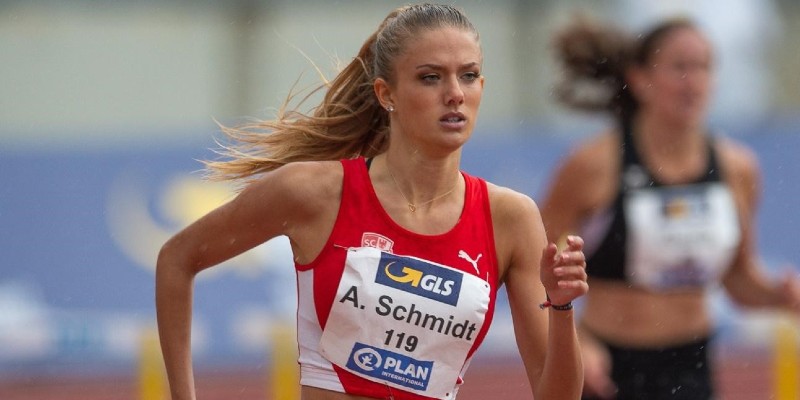 Alica Schmidt is 21 year-old German Track-and-Field star that was recently voted as the “World’s Sexiest Athlete” by an Australian publication called Busted Coverage. Schmidt was part of a junior German team that managed a silver medal at the 2017 European Athletics Under-20 Championships for the 4x400 relay. With over 850 000 followers on her @alicasmd Instagram account, Schmidt doesn’t really know what all the fuss is about. For her sport always comes first.

Hilary Knight is an American Ice Hockey player from Palo Alto, California. With a career spanning 14 years, Knight has played for a number of teams, including the United States women’s national Ice Hockey team, and more recently, the Les Canadiennes de Montreal. She has won a total of nine gold medals in her career, one at the Olympic Games, and eight at the World Championships. She can be seen on Instagram at @hilaryknight.

Silje Norendal is a Norwegian Snowboarder who competes in slopestyle. At the age of 26 she is a multiple gold medal winner, having competed in the Winter X Games, the World Championships, and the Winter Olympics. She can be found on Instagram at @siljenorendal.

Alison Stokke Fowler is an American Track and Field sensation known for her skill in pole vaulting while competing in the NCAA College division. She retired from professional pole vaulting in 2017. She is married to professional Golfer Rickie Fowler. Stokke can be followed on Instagram at @allisonstokke.

Malia Jones is a professional Surfer and model from California, USA. Jones began Surfing at a young age, making a name for herself in that field. However, she would eventually pivot into a successful modeling career, having appeared on the covers of over a dozen magazines. She cannot be seen on Instagram, but the handle of her official swimsuit line can be seen at @maliajonesswim. Paige VanZant is an MMA fighter from Oregon, USA. At only 26, VanZant’s MMA career already spans over 8 years, 6 of which have been as part of the UFC. To date she has 12 professional wins and just 4 losses. She has a purple belt in Brazilian Jiu-Jitsu and has also released a book about her career in fighting. She has over 2.5 million followers on her @paigevanzant Instagram account.

Hope Solo is a World Cup winning goalkeeper for the United States Women’s Soccer team. As well as helping the USA to win the 2015 FIFA Women’s World Cup, Solo has also helped clinch two gold medals for the USA in the Olympics. She currently has over 1 million Instagram followers on her @hopesolo Instagram feed.

Maria Menegatti is an Italian Beach Volleyball player and former world number four in the sport. Over her career she has achieved a number of medals, including two gold, seven silver and seven bronze medals. Menegatti was also the 2011 European champion and 2013 Mediterranean Games champion. Follow Menegattai on Instagram at @marta_menegatti. Maria Sharapova is a name that has become synonymous with the game of Tennis. Though she was born in Russia, and is a Russian citizen, Sharapova has lived in the United States since 1994, when she was only seven years old. She became the world number one in 2005 at the age of 18, and would go on to win dozens of titles over her career before retiring in 2020. She can be followed on Instagram at @mariasharapova.

Grace Gold, aka Gracie Gold, is an American Figure Skater and multiple award winner. Among her accolades Gold has been the two-time US national champion and two-time World Team Trophy Champion. She is also the only American woman to win an NHK Trophy title. And all this at only the age of 24. @graciegold95 is her Instagram handle.

Darya Klishina is a Russian Long Jumper who made her mark on the sport from a young age. She has competed in the top tier of Russian athletics for many years, winning multiple medals, including two golds at the 2011 and 2013 European Indoor Championships, and one gold medal at the 2013 Universiade in Kazan. Her official Instagram handle is @dariaklishina. Sandrine Gruda is a 32 year-old French Basketball player who currently plays centre in the Italian Serie A.  She is the daughter of Ulysse Gruda, a former player for the French men’s Basketball team. Gruda led her team to victory in the 2009 Eurobasket where she was also the best rebounder and scorer on the French team. She can be seen on Instagram at @sandrine_gruda.

Kiira Korpi is a Finnish Figure Skater whose professional career spanned from 1993 to 2015. During that time she was five-time Finnish national champion and medalist across a variety of other international competitions. Korpi’s official Instagram can be seen at @kiira_korpi.

Lauren Sesselmann is a professional Soccer player who currently plays defence for the Santa Clarita Blue Heat. Though she was born in the USA, Sesselmann is a Canadian citizen and played for Candian Women’s national team from 2011 to 2015. She is an Olympic bronze medalist and has also produced her own DVD fitness program called Fit As A Pro with Lauren Sesselmann. She can be seen on Instagram at @lsesselmann. Lindsey Vonn is an American former Alpine Ski Racer. She is one of only two women to ever win four World Cup overall championships, three of which were in consecutive years. She is also the first American woman to win gold in downhill at the 2010 Winter Olympics. Vonn has cemented herself as one of the all-time female Alpine skiing greats with multiple titles and records across her career. She retired from professional skiing in 2019. Follow her on Instagram along with her two million followers at @lindseyvonn.

Mixing with the best

That’s it for the Spin Sports list of the top 20 sexiest female athletes. These women have all made a name for themselves both on and off the sports field and have cemented themselves as sporting legends in their own right. They are of course just a small handful of the amazing and talented sportswomen out there today. There are still many more ladies who continue to compete and make a name for themselves.

Spin Sports mobile casino is the home to big names like these and many others who are open for betting. Players can visit our site to place bets on the current and next big names in women’s sports. Who knows, the next big name might be waiting to be discovered. Football fans throughout Europe are eagerly awaiting the UEFA Championship League Final, the crowning event in the league. It’s the end to one of the most prestigious tournaments in Europe,... Continue reading